"It's a rock, it doesn't have any vulnerable spots!"

Event Info
Thanks Bryce for the write up! 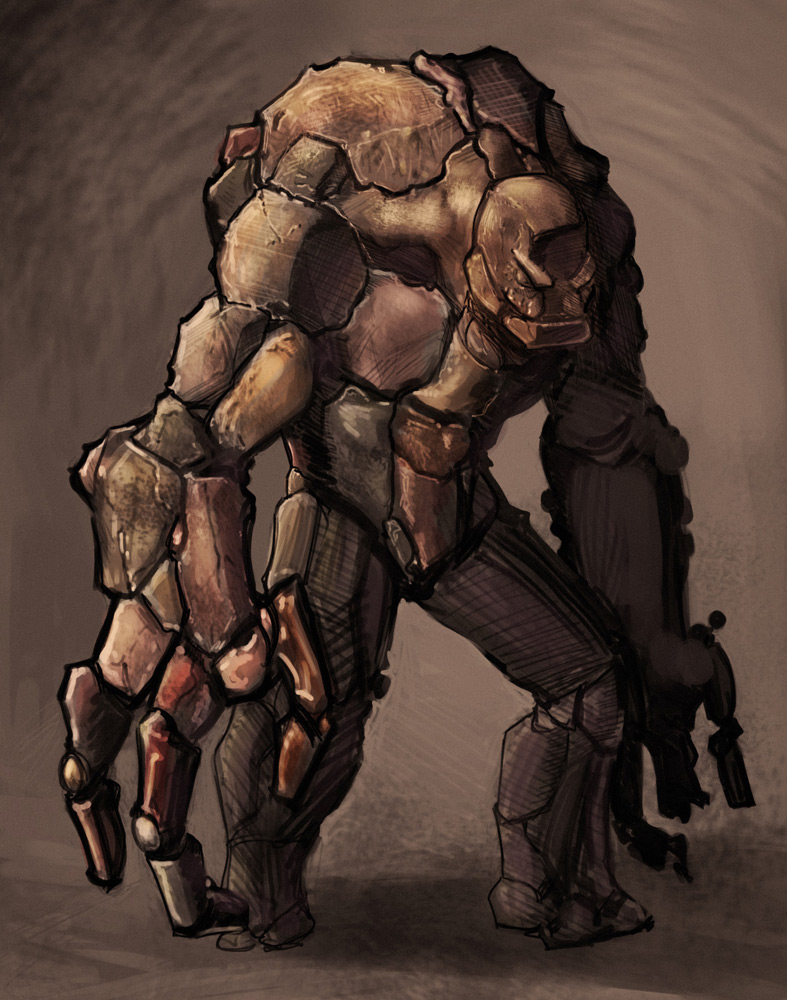 The sword wielding cultist deftly strikes Ulrich and Morwen. Ford gathers his courage and steps back and begins to whistle a lilting tune. The party’s pulse begins to quicken to the beat of the song. Amalia fires a couple of arrows in rapid succession at the granite behemoth. One glances off of its chest. The other strikes home, but shatters against its rocky exterior. There is a quick intake of breath as a arrow appears in Ford’s arm. Verity whispers a quick prayer and is suddenly clad in resplendent armor. She approaches the monster as it smashes her with a hay-maker. Morwen dispatches the last cultist in a flurry of blades. Aran unleashes a few kicks at the monster only dislodging a few pebbles from its crust. Ulrich begins to cast a spell and his skin takes on the same appearance as the parties foe. Ford begins to belt out a spell and Aran begins to grow larger. Amalia begins to change her form, assuming the same shape as the rock creature. The rock focuses his attention on Aran who deftly avoids his crush blows. Morwen begins to sing of song of valor and courage to inspire the party to greater heroics. Ulrich backs away from the rock monster and with an adroit motion has retrieved and begun to quaff a potion from his robes. Ford makes a throwing motion and a cloud of dust appears, though it reveals nothing. Rockalia walks forward and slams her smaller rock arms into the legs of the large rock golem, to no effect. Verity begins hammering at the monster with her mace. Morwen has maneuvered herself to the other side and is using her sword to the best of its ability. Some rocks have been chipped away, but the rock elemental stands tall. Ulrich begins an incantation in a low rumbling voice and his hands begin to crackle with the glow of an electric energy. Ford does a bell kick and appears next to the pile of rocks his cane in hand. In a brisk movement he has unsheathed his weapon struck and re-sheathed it. Ulrich charges up the stairs finding a small alcove. A pair of archers panic from their prone positions revealing themselves. Ulrich throws the stored energy in his hands out in a crackle of lighting that envelopes them both, reducing them to ashes in the blink of an eye. The rest of the party continues to to assault the golem, though they are beginning to find it slightly easier. Ford’sweapon has begun to glow with a purple light and the golem’s granite body seems to be becoming a weaker substance. The floor is becoming littered with chunks of rock as the party slowly whittles it down. Amalia seeing that her rock body is having little effect transforms her body into a billowing air elemental. Airmalia surrounds the golem in an attempt to lift his legs and trip him, but he is too well grounded. Finally the final blow is dealt and the golem falls to pieces in a heap of rock and sand.

Ford dashes forward, hunting for something only he knows. Aran quick follows in pursuit. The rest of the party begins to search for any clues as to who could have left such a grisly scene.

39 - Dark Tidings, Mangled Friends "What is in his sack?"

37 - The Fate of Captain Blackbeard Well, more gray than black, and bushy!

36b - Tower Draconis The Money Pit