The fate of the Andrigal Line

Event Info
Thanks Bryce for the notes!

The adventurers leave the basement of the Andrigal Mansion to recuperate and think about the the dangers they have faced. It is still mid afternoon which allows everyone to lick their wounds in their own way. Ulrich heads to the Silver Raven to have a quiet meal to himself. Lindy returns to the Hoof ‘N’ Mouth to procure her keg of beer. Tobias sends Axle to the Hoof ‘N’ Mouth where he can rest while he ventures to the Temple of Boccob hoping to find answers in prayer. Morwen goes to the Dancing Dryad seeking information on the local Orphanage, and Amalia seeks answers on Oak Island.

Lindy travels to Frog Park where she can drink in peace while making an offering to the spirits. She spends the night drinking outside.

Amalia meanwhile has traveled to Oak Island looking for the Temple of Elhonna. Wandering through the underbrush she makes her way to a Beacon that faces the south.

Morwen finds out the main show at the Dancing Dryad doesn’t start until later. She makes her way to the market to spend some time before the show. Returning the Dryad she is startled to see an actual Dryad on stage. She watches the show before returning to the The Wicker Goat to rest for the night.

Tobias worried about Axle seeks knowledge as well as greater strength at the Temple of Boccob. He spends time there practicing basic magical arts as well as talking to the attendants. He returns to his room at Hoof ‘N’ Mouth to tend to Axle’s healing skin and singed fur.

The next day Morwen does some research on Oozes as well as buys a quarter staff after finding that oozes are easier to squish than stab. Tobias purchases some anti vampire weapons that he loans to Lindy and Amalia. Amalia talks to Lankus at the Wicker Goat. Lindy nurses a hangover. They realize that Ulrich hasn’t met up with them so they travel to the Silver Raven to get him, only to find that he has left in the night with Hoskin Lashti. They leave a note and continue on their way into the cellar of the Andrigal mansion. 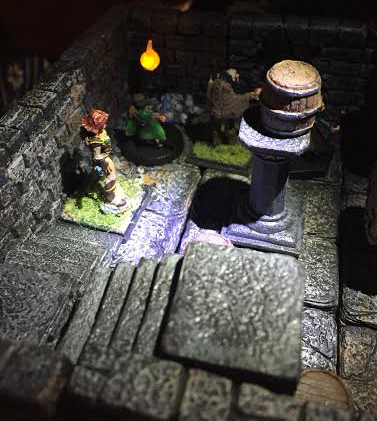 Having a better view of their surroundings they see that large cobwebs line one of the walls while a small pond softly gurgles in an adjacent chamber. They boldly stride toward the dank pool, armor and arms clattering. Having already encountered a large ooze the party tests the ponds substance with a jab of a staff. Small albino fish dart to and fro having been abruptly disturbed. As the ripples settle in the water, so do the fish. It is just a shallow pond.

Through the stalactites Lindy hears an echo of leather scraping in what appears to be an adjacent area. Passing the light forward through the ranks to get a view of what it could be Lindy spies a few figures milling in the near darkness. One of them is dragging is foot behind with a scrape…scrape as its leather boot drags along the cave floor. Lindy barges through the small opening sword shining with a holy light. The rest of the party joins the fray and make quick work of the zombie like creatures. A small ooze attacks Lindy while she is dispatching one of the creatures, and that mistake would be its last. She drops her softly glowing sword and pulls the hammer that she had been carrying for this very purpose. 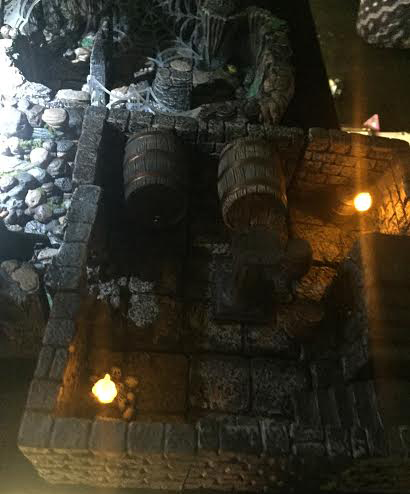 The path near the pool winds around and they find themselves in the original chamber with the wall of cobwebs. Taking the lead position in the narrow hallway, Lindy, draws a quarter staff and begins to wind the webbing around it like it was candy floss. They see a large spider in its lair, though they decide to leave it be as it was minding its own business.

They continue along the path coming upon a dilapidated bridge that crosses an seemingly bottomless ravine. Tying a rope around themselves they almost make it across unscathed until Axle’s weight breaks the ropes of the bridge. He begins to plummet, but Lindy has braced herself against a large stalagmite. She holds onto him, though the rope begins to slip from her grasp. With a grunt of effort her skin begins to ripple and hair begins to sprout from her skin. Her armor and weapons seem to sink into her flesh. In her place stands a black bear. The bear begins to pull on the rope using its claws and teeth and successfully pulls Axle from the ravine. With a shudder the bear fur gives way and Lindy’s armor and weapons begin to appear. 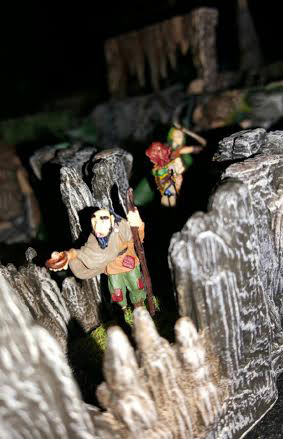 Finding a fork in the path the group continues to the left. They see a soft blue light from an upcoming corridor that gives them pause. They creep forward to see a patch of mushrooms that are giving of the soft light. Tobias identifies them as a type of bioluminescent fungus that is known to be of use to alchemists. They gather a handful of mushrooms each and continue on. Tobias seemingly frustrated with the lack of light hums with power for a moment before his dagger begins to shine in the same manner that the pebble Amalia touched does, though the light seems far weaker.

The path of mushrooms widens after a few feet into a large chamber. In the center lies a bed that shows sign of recent use. Rummaging through the bed Tobias finds a diary and Lindy finds a small cigar box filled with finger bones, but no sign or clue of the occupant. Circling back through the room leads them to another chamber that is seemingly empty until Morwen and Amalia discover a revolving wall. Behind the wall they find a hidden room with a small pile of gold and a desk with a crate from Radric’s General Store sitting on it. Tobias shuffles through the papers trying to make an imprint of the last thing written and Lindy gets frustrated smashing the desk to pieces. She finds a metallic object which she passes to Morwen who identifies it as a wax seal of the Andrigal house.

Continuing down the only available path they see an enormous mushroom identified as a nightshade shrieker. Incredibly deadly if ingested, possibly if contacted by flesh. They pass it by knowing that anyone who dealt with such matters may not be the type they wanted to be so close to. 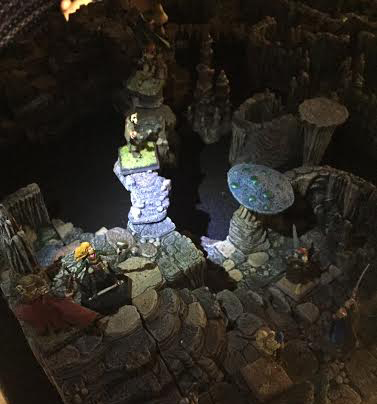 Coming across another gorge they decide that without a bridge jumping will be the most effective way of crossing. Tobias hands his glowing knife to Morwen so that after Lindy jumps there will be a light on either side. The pathway seems to lead upwards and they can feel a small draft. There is a small walkway that leads across a chasm with no bottom in sight. Lindy begins to crawl forward slowly on her hands and knees. Tobias uses his shape-shifting abilities and turns into a large bat to fly near the party. Morwen and Amalia have no problem crossing the walkway, seeming to marvel at the actions of the normally without fear barbarian warrior. Midway through the catwalk the wind picks up. The air suddenly drops in temperature and the stagnant moisture in the air begins to precipitate into fist sized hunks of ice. The shards rip through the group and makes the footing even more treacherous.

As suddenly as the indoor storm began it has abated, but the fear of powerless drives the group on. They reach the far end as quickly as they can and are confronted by a cadre of vampires and their ghoulish servants. Lindy draws her sword and begins to fell them swiftly. Morwen nimbly jumps to her side to assist her with her enchanting music as well as a swift blade through the throat of a fallen beast as he begins to rise again. As his head bounces down into the chasm Amalia cries out. A vampire has her in its grip and is slowly sucking the life blood from her. Lindy turns her attention to the fiend as Amalia sticks her dagger into its side. The wound begins to ice over and the vampire releases her from his grasp. Suddenly in his place is a swarm of bats. And as suddenly as the fight began it is over. The bats have scattered and there is nothing left. They search the bodies for any clues as to what they could be up to, unsure of the meaning of what they have found they know it is time to go.

They leave the way they came jumping across the chasm which lost its bridge. Tobias asks Lindy to move one of the large casks of beer to the hole in the wall. After it is in position he places his wooden hand upon it and mutters a few words. The barrel rocks as the back half of it melds to perfectly fit the shape of the hole. The beer which has long since turned floods the cavern. Nothing aside from the spider sees as it pools into the many cracks and crevices, running off into the abyss.

Nothing left to do but return back to the city proper and plan the next move.

Nothing remains here but the stench of death and the sadness of a house that has long since been broken by time.

29 - Accursed Food Seek her in the earth

28 - Plague on the Horizon Hot on the last vampire's tail, a new threat emerges.

26 - Pursuing the Beast Back to Civilization

25 - The Cleansing of Ornthalas Secrets revealed